A new Runway 1L-19R for Dulles

When aircraft operations at Dulles grew to more than 509,000 in 2005, expanding the current three-runway system became a necessity. The first three runways at Dulles date back to the Airport's 1962 opening date. This project adds a fourth runway and paves the way for a future fifth runway. Both runways were approved by an FAA Record of Decision in 2005.  Construction of the fourth runway began in 2006, but fifth runway construction is not yet scheduled.

The fourth runway is a north-south runway, approximately 9,400 feet long and 150 feet wide.  It is about a mile west of the current Runway 1L-19R.  On June 5, 2008 it was officially designated Runway 1L-19R and its predecessor became 1C-19C.  The numeric designation is the runway's compass bearing in degrees, divided by 10.  The letters stand for left, center, and right. The new runway includes high-speed exit taxiways and is equipped with an instrument landing system and associated lighting systems. 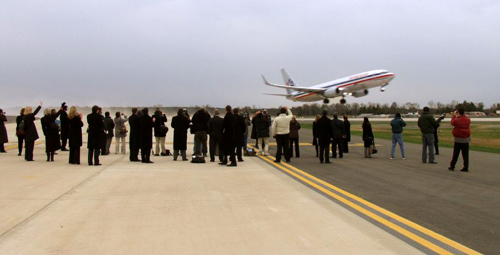 The fourth runway opened for service on November 20, 2008. The photo shows the first takeoff from the runway, an American Airlines flight bound for Los Angeles. Several connecting taxiways between the new runway and runway 1C/19C are scheduled to be completed in 2009.

Construction dates for the fifth runway will be set in the future.

Statistics about the Fourth Runway: